Republican David Condon’s big blue signs have begun to appear around Spokane as the McMorris-Rogers conservative begins his run for Spokane mayor.

Non-partisan? I don't think so! One of David Condon's "non-partisan" signs on Monroe Street at the entrance to the Monroe Court Building just north of downtown Spokane. (Click photo to enlarge)

Condon was until May Day 2011 the Deputy Chief of Staff to arch-conservative, partisan 5th District U.S. Representative Cathy McMorris-Rogers.

Obviously Condon is not non-partisan and only an electorate as uninformed, apathetic, confused, and frustrated as the US electorate tends to be would fall for this.

But re-branding is a tried and true US marketing tool.  Look at Blackwater, the murderous US mercenary outfit, now called Xe.  Or how Amway became Quixtar, at least in North America.  And though I was not around in the early days of Spokane, no doubt it was — and continues to be — an easy mark for snake oil salesmen of all sorts.

And certainly marketing and re-branding is one of the things Condon will be able to afford with the kind of Republican money his campaign will have access to.

As the Spokesman Review put it on May 2, one possible explanation for Condon’s decision to emphasize the non-partisan nature of the Spokane mayor job is to obscure his true colors in “a likely acknowledgment that the city leans Democratic.”

So if you don’t want to run under your party affiliation but you live in a society that is wedded to the concept of a two-party ruling class consensus, you might just  look for an ambiguously safe political banner to run under. Independent. Non-partisan.

Curious isn’t it that a Republican would chose to run for mayor by running away from his party, his partisan past, and the skirt-tails he has ridden all these years.

One possible explanation is that David Condon knows that no matter how much money one throws at an election — and he and his backers no doubt intend to throw a lot of cash* at this one — the will of the people at the ballot box is still supreme.

(Okay, I know.  The Republicans have stolen a couple presidential elections in recent years by a combination of ballot fraud, both high tech and low tech, and court action.)

By attempting to steer voters away from the obvious — that the man is conservative Republican — one aims to confuse voters, too many of whom go to the voting booth unclear as to who stands for what and why.  A last minute round of eeny-meeny-miny-mo by too many voters can result in vague concepts such as “non-partisan”, planted in the voter’s mind and emphasized over and over again, giving birth to voting decisions that spell the difference between victory and defeat on election day.

Not on your life.

*According to the May 2, 2011 Inlander, Condon plans to raise nearly half a million dollars to defeat Verner.

Posted by arroyoribera on June 28, 2011 in Condon, Monroe Court, Non-partisan

Monroe Court courts Corker — or perhaps they are already married

Well, at least the sign was there, as evidenced in this mid-June 2001 photo shows.  As of June 24, the sign had been removed. 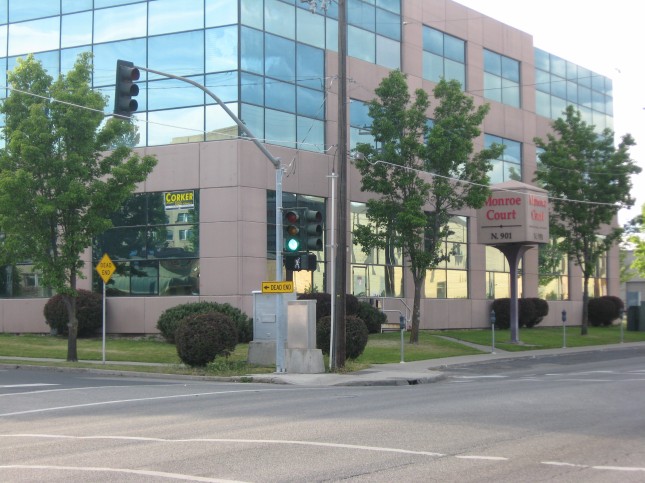 Now you see it, now you don’t. Corker’s sign on Spokane developer and cardiologist Marcus DeWood’s Monroe Court building has since been removed. (Click to enlarge)

Perhaps the marriage was unsuccessful.  Or perhaps it was not a marriage but rather a failed courtship.  Or maybe it was simply an uncomfortable coupling, better kept under wraps.  While it may be too late to do that, the memory is very short.  At least compared to the camera’s lens and the internet.

Another one that has really left me scratchin’ my old noggin is this “Monroe Court Ltd. Partnership.” Monroe Court has donated $1,500 to both Nancy McLaughlin and to Mike Allen making them the top donor to both campaigns. So…. who is behind this “Monroe Court“?

Turns out, according to the Department of Licensing again, Monroe Court is a partnership between Dr. Marcus DeWood, a local cardiologist and developer, and something called “N Pacific General, Inc.” Well, Pacific General Contracting, Inc., is owned by Dr. DeWood and his wife, Luann Padgham.

Of course, it doesn’t end there. In May 2008, on a 6-1 vote (Richard Rush was the lone vote against), the Spokane City Council overturned a decision by the city hearing examiner and allowed for a zoning change that would allow for the construction of a 150-foot tower west of the courthouse (Story: “Spokane council vote allows proposed tower near courthouse,” Spokesman.com). The developers behind the tower? Marcus DeWood and Luann Padgham (No word on the rumor — that I just started — that Dr. DeWood is talking with David Elton about building a skyscraper in Browne’s Addition, too).

So it appears the DeWoods are Steve Corker backers this time around.

But why take the sign down so soon after putting it up?

Could it have something to do with a DeWood reader board?

More on that soon…

Posted by arroyoribera on June 25, 2011 in Bedfellows - strange or not, Corker, Monroe Court

And they are off….

Some of this will be mundane, some perhaps comical, and some, if we are lucky, enlightening.

And when it is over, we will see who fails to clean theirs up!

Well, let’s just hope that this blog gets more attention than some of the others the author has penned in recent years, such as Spokane Police Abuses, Spokane Racism, Spokane Economic Indicators, and Spokane’s WR Grace Asbestos Hotspot.

As with these other blogs, your comments, critiques, suggestions, and photos are welcome.